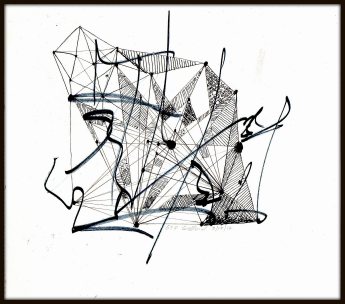 Working on visual ‘ideas’ for a larger piece. Would you believe I’ve been working on the this for 3 days? It’s only 15x17cm, but pen & ink (with my beloved crow quill nib (Hunt No 2) is labor intensive, and I need lots of time between working sessions to observe and think about where it’s going.

I feel a contradiction, a painful tension between the increasingly abstract art I’ve been making, and my desire to make what I do register as resistance, as opposition to the fascist coup and all the horrors it’s begun to unleash.
But I can’t… I can’t work like that–come up with an idea to show what I’m thinking–something with an intelligible ‘message’.
The message, if there is one, is there. But it’s in the tensions between containment, ‘authority,’ and liberty of movement. It’s all visual. When I feel the need to SAY… I write a poem. And even there, it will be elsewhere… as the world we need to make to survive… is elsewhere. Do you understand this? Does this make sense?

View portfolio here ART BY WILLARD
For photos on this blog:

In 2011, I wrote a chapbook, self-published (if you can call Kinkos generated pages, “published”); I called it, Overriding Genesis– from the Hebrew text of the 1st creation story in the book of Genesis.

In transcribing pages from the journal, I found a reference to this interview–which I’d totally forgotten, from Damask Press, on the occasion of their publishing pages from a longer poem, Chronos Chronic Kairos, as a chapbook. Damask Interviews: Jacob Russell. This was published on September 16, 2011… the day before the first day of Occupy Wall Street.

The text of the interview following the break END_OF_DOCUMENT_TOKEN_TO_BE_REPLACED

A Library Things review of Ari Figue’s Cat.
This review was written for LibraryThing Early Reviewers.

When I was offered this book to review I was genuinely excited. Any novel by a visual artist is likely to discard a lot of the tropes that professional novelists have bound themselves to and which frankly just get in the way of a modern take on literature. I first recalled Hebdemeros by Giorgio de Chirico and the novels of Alasdair Gray and Jan Cremer. I waited patiently and when the book finally arrived I started it almost immediately.
Russel does indeed provide a different take on the novel – abstract and fragmented the chapters, if chapters they be, do not narrate a story of any traditional mode. Impressions, memories, false and true, interior, visual description and musings on the nature of reality and perception drip through the book like Pollocks sprawling canvases and fragments like the cubist paintings of Braque.
Ari Figue’s Cat puts a marker in the ground for contemporary writers. I’l be revisiting soon.
papalaz | May 29, 2015 |

To be honest, I’m equally pleased with the two who didn’t “get it.” They got what I didn’t want to do.
Not everyone is going to like this book. 🙂

An experiment in poetic prose, nonlinear scenes, and even font style, this novel offers a tale of a vibrant city full of mystery.

Ari Figue’s Cat is Jacob Russell’s deep, perplexing novel of finding love in the least likely of places, and its complexity will either enthrall or completely alienate readers. But for those who enjoy experimental literature, this book will entertain.

A couple of good mini reviews on LibraryThing. And see that it can be ordered now from Amazon.

And some good mini reviews on LibraryThing:

I really dislike trying to write these things, but painted into the corner–the need for something straightforward to secure a potential review–I think I nailed it!

Ari Figue’s Cat is a search for the meeting points between imagined and real identities. The protagonist, who may or may not be named Jacob, sees a young woman on a commuter train, dabbing at what appears to be self-inflicted burns. When he later sees this same woman from his widow making a snow angel, he becomes obsessed with the contradiction between what he imagines her to be, and her elusive, untouchable reality.

The same theme is carried through for the other characters. The style and structure of chapters reflect the characters who appear in them, from apparent conversations with an invisible therapist, to dreamlike and magical, to straight forward narrative story telling. This is a book that would appeal to those searching for something outside of Establishment Literary Fiction: an experimental novel that does not eschew evocative description and beautiful prose.

Ari Figue’s Cat can now be pre-ordered in digital from from Smashwords.

This review will be released in the summer issue of Forward Reviews, by Barbara Nickels.  Still in editing stages for now, but here are a few lines.

An experiment in poetic prose, nonlinear scenes, and even font style, …

Ari Figue’s Cat is Jacob Russell’s deep, perplexing novel of finding love in the least
likely of places,.. its complexity will either enthrall or completely alienate readers. But for those who enjoy experimental literature, this book will entertain.

Overall, a very positive review. This is an honest appraisal. It’s not Establishment Literary Fiction. I would have been mortified had she thought it was. It seems that the reviewer found it a challenge, and a satisfying one. I couldn’t be more pleased.

Ari Figue’s Cat can now be pre-ordered in digital from from Smashwords.

My novel can now be pre-ordered from Smashwords.

I have a work-in-progress. Fiction. Working title: Found Things. Closing in on 100,000 words, so by volume, I guess it’s a novel. Or would be if I could stop rewriting draft after draft and finish it. I began work on it a month or so after finishing my first novel—in 2001. Nine years and counting. My last run at it was going pretty well, but I wanted to get back to poetry. I would start to write and find myself scribbling out notes for poems. The notes began to turn into poems Sometime in November I put the novel aside. Have written almost 100 new poems since—and happy for it. How could I not be? Never been so productive in my life. But I can’t say I’ve stopped looking back, stopped thinking about the unfinished novel.

It’s more than leaving something undone. I’ve abandoned cartloads of stories and poems without a moment’s regret. This is different. it tugs at me, nags; I go to sleep thinking about it and wake up ready to to dive back into it. Then I write another poem, and realize that, as much as I’d like to resolve this, I don’t want to put the poetry aside.

A few days ago I realized that if and when I did get back to it, I would have to do a major revision, right from the beginning. The main character is way too passive. I’ve been holding something back, I thought. As though I was courting sympathy on his behalf, as though I wanted readers to like him! This was a deeply satisfying idea—to make him driven (he already is, but so far, with no clear object or motive). Driven, manipulative, self deceived.

Now I’m thinking that’s still not enough. Yes, I want to finish it. No, I don’t want to write a ‘novel.’

Not anymore. Not the sort of novel this keeps turning into. And playing with the characters isn’t going to change that.

Why not write it over. As poetry? Something no less radical.

It’s how it began

There are chapters now that read like conventional short fiction. I meant them to stand in contrast to their surrounding context. They do, but the difference is not stark enough. The contrasts are superficial, stylistic, fail to penetrate to the level of language itself, fail to push at the boundaries of poetry and prose. most disturbing of all, fail to challenge the hegemonic authority of narrative, its power to harness every other element–space and time itself–to the task of fulfilling the mimetic desires of the reader.

What is the pleasure—or the point—of limiting our efforts to what we know we can do?

Finished now. Proofs waiting for release of this book, May 25. Did I do it? How far did it fall short? Will there be another?

… what do we do with the house we had them build?

What is the source of the arrogance and intellectual laziness of those, who, thinking that in rejecting belief in the gods, that they’ve freed themselves altogether of the inheritance of religion–when all they’ve done is kick the spooks out of the haunted house and replaced them with the ‘human,’ whatever that is–forgetting that this house was built by the gods. That is–its building is what we invented the gods to do, and as its existence makes no sense without them, they are without further ado, replaced… with ‘us’… with the mostly unexamined illusions we think we see when we think we’re looking at ourselves in the mirror.

What I had in mind when I wrote these two poems: Taking Leave of the Animals, and Like Nothing in this World (Phila Stories: Winter 2008).

The animals, of course, are not the one’s telling the lies–but the irony is itself a multi-layered lie, establishing a falsely separate kingdom of Being for the human while covering over the consequence–by building the myth of the human apart from the other animals, from what we imagine as the House of Nature–and in that very act, establishing the necessity of duel Kingship–the double thrown of creator god and his perpetually infantilized servant-subject. The complacent atheist pulls the trap door on Nobadday, only to climb onto the vacant thrown and assume that imaginary rule for the hu-Man-god.

Instead, we gathered the names, leaving the animals
Speechless in the forest brakes, the river’s course.
Only now do we understand the nature of our loss

We cannot begin without taking leave
They were more than we could bear, these words.
They grew fruitful and multiplied

We hung them on every bough.
There were not enough trees to hold them.
They fell to the earth like leaves

How can we leave
What was never ours to begin with?
How can we ever return what we found
in their burning, silent eyes?

I found them one day searching
For change, but my pockets were empty
Everything now must remain as it was

Following the animals over the plains
Listening to their lies, their endless
Stories of gods who will not let them be