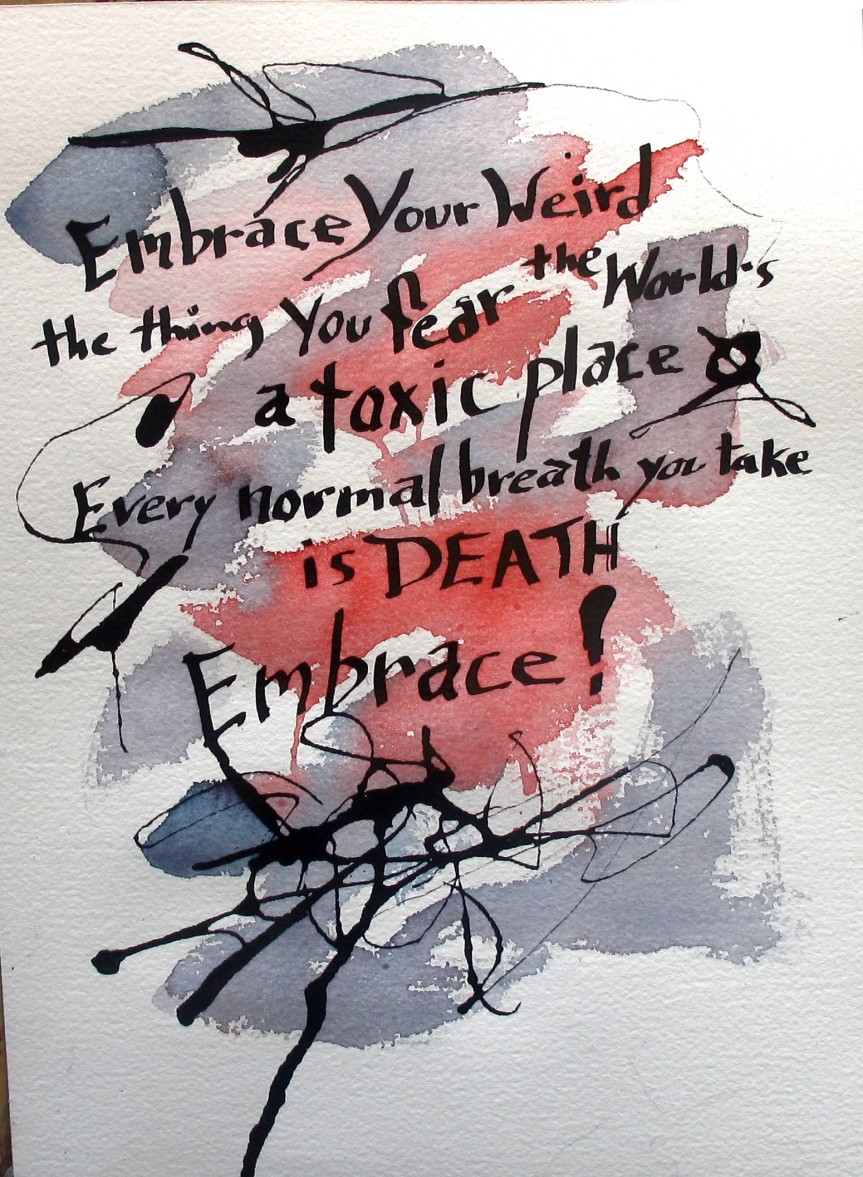 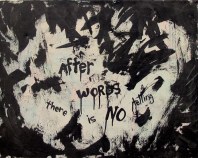 I deplore the use of false comparisons to scold or draw attention to this or that problem, versus another, perceived to be of lesser importance. These all presume some zero-sum equivalence, where there are insufficient resources, material, economic or social, to attack both, when, if this is so, it is only because this presumes a status quo of capitalist, political conditions, where the the application of resources to ANY given problem, will result in withholding resources from another–maintaining an equilibrium of injustice.
All these–“why are you asking to give to x, and not y?” in that larger context, are false equivalences, and if that logic applied to anything, it would be, ‘why are you asking to devote resources to x, when the only thing that’s going to matter in not so distant future, is climate change?”
The real question for any problem, is how do we apply our resources in such a way that it will address the root causes for all these problems–overcoming and replacing the entire capitalist political/ecomomic/social/military/colonialist system? How do we CHANGE the role played by each and any of the specific problems, in that system?.
Understanding the importance of the arts and its products–other than in terms of use-value, and propaganda, is particularly vulnerable. It is precisely in their HAVING no use value, that they confirm that our lives have meaning in our otherwise doomed and absurd world.

Why is it so hard to find committed, radical/anarchist artists–committed, both to making art, AND to working together to find ways to make art outside the capitalist, gatekeeper, gallery to investor system? Cause no one can do this alone.
One of the factors in what makes me so discouraged, and depressed in my efforts to make art.

It can’t be just talk. It has to be action–discovering, creating through action. It has to begin with saying: we can’t do this anymore! We can’t work within the system anymore! Enough!
And then–looking at what we CAN do–and doing it!

Though the material and social problems involved are unique to each medium and form–this is something that should be addressed by artists of all kinds–dancers, theater people, poets, musicians –together, as a collectivist work.

Such freedom as we have, arises out of the generative power of imagination and dreams, which change the shape of our interactive world to make room for us to act out decisions made before we are aware we have made them. Everything in this movement is indirection. We are able to choose to follow a path, only as we are able to imagine it into existence. These are words which describe how that feels to me.

In the morning, I think–I’ve come to the end of what I budgeted for wine this month. I think I’ll not buy any more until the next Social Security deposit–or until I sell another painting, but by some time in the afternoon, this resolve undergoes a change, I can feel it happen: I will finish a painting I like, and want a glass of wine for a reward. I begin to prepare dinner, and think, how good it would be to have a glass of wine with this marinara–and I go to the wine & spirit store, and buy that nice, inexpensive Tisdale Pinot Noir that I like.

What is an addiction, but our body partnering with the source of the addiction to hinder our ability to imagine ourselves without it, as in mourning the loss of one we have deeply loved, we are for a time–even for a lifetime–unable to imagine our lives without them? Imagination is of the body, our body inescapably hooked into the world.
I can, to some degree, give myself to imagining–but always indirectly, by doing something else. Writing a poem, making a painting, the making, what I am doing– choosing pigments and brushing color on the canvas–becomes that ‘something else,’ as I work. When this happens, when I finish–what I’ve made becomes a wonderment, something I had not known I had imagined until it is there before me. The opposite of perfectly completing a task I’ve planned out from the beginning–unless the planning, all along, has itself been the foil. If the painting doesn’t surprise me when I finish it–it feels like a failure. I feel like a failure. As though I had betrayed a job I’d been entrusted do.

“Free will,” as most commonly expressed, is an illusion. I think most of us, most of the time, are but instruments of the machines we have made and set in motion to act in our place, and those who appear to have the most power, are the least free, unconscious servants of the Machinery of Money and Death.

What will free us from this addiction? 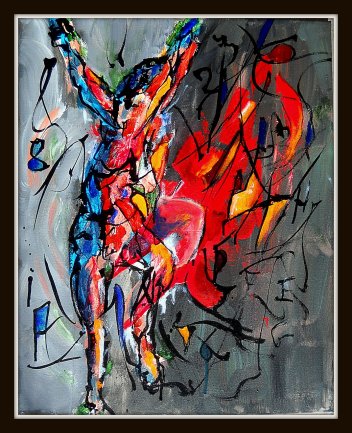 Think about how it would change the world, if we were to understand, and treat, music, dance, poetry, the arts, not as cost-deficit sidelines, to be cut from schools to make way for serious subjects, but as the reason and purpose for everything else we do!

We need to raise food, because we need food to give us pleasure, and to make art! We need shelter and housing, so we have places we can make music. We need medicine, to stay healthy so we can dance and make poetry!

Make life for pleasure, for deep pleasure, and it will change the world.

Began the day, inspecting the garden, reading Emily D… I’ve been systematically reading the whole of the collected poems, beginning to end. I skip around, read back and forth, but always keep to the sequential reading as well. Today, 564-603… 1862. A reference to Antietam… (Scarlet Maryland) in #562. She follows the news, and fuses intimate domestic scenes with distant events, the way she does with cosmic, biblical, religious references, deflating the latter, and casting a miraculous light on the everyday. Though there’s no deflation of what she has learns of the war, or human tragedy. #564 made my brain explode. I read with a dictionary at my side, and can only cover a half dozen or so a day. I write marginal notes in tiny letters with a mechanical pencil. The binding has gone the way of all impermanent things. Entropy everywhere. I should buy a new copy before I accidentally drop this on the floor, and all the pages scatter–hopeless to return them to order.

Thinking about how she follows the news… how, no matter how devoted one might be, one can only read to the last page. There’s an end to a newspaper or magazine. What would she have made of the internet? There is no end to the internet, or Facebook. One goes on clicking and clicking, until the clicks are what the ticking of a clock was for those who lived when there were still clocks that ticked… the sound of one one’s life being drained away.

We learn from Freud, as from novelists and poets, if we learn anything at all, that we can never “know ourselves.” We fool ourselves in too many ways, and what we are, our Truth, is never fixed, but always moving, always becoming, becoming something else. How much more the difficulty, when the object of our knowledge is at a great distance.

Or is it the other way around? –the closer to the center (should I say, the heart of our being?) –the less we understand, the less we can claim to know?

Closest to one we love, our knowledge approaches a zero point–though knowledge (always imperfect though it is) circles all the while like stars in a galaxy around the black hole of love, of self–around that center–with ts power to draw toward its eventual horizon–all that we believe we know: self & beloved,  & love itself– & yet, remain untouched by mind–untouched, above all, by language, even while, in ways beyond our power to know–there from that dark, unfathomable pool, emanates the forces that shape language, all that we know, think–or think we know.

Is that how philosophy came to be captured in a word for love? And how, all the arts, all that has power to bring us to the end of knowing–are of the annihilating & generative power of love?

Love, the word we give to that manifold desire that can’t be named, or tamed–destroyer and creator of good & evil, end & beginning of all that we make & do, fusion of Vishnu and Shiva… Harihara.

Rescued from the dusty basement, cleaned up and in my drawing studio.

There’s a history to this. In 2009 I began to hang poem cards on a dead tree on E. Passyunk, in South Philly, not far from where I lived. At first, I would find them missing, or torn on the street the next day, but I kept going back with new ones, and strings on can tabs, and ribbons, and decorated the poem cards with glitter, colored them with crayons. After a time, they were left alone. People began to notice, to stop sometimes to read the poems.
In the spring, the city uprooted the dead tree and planted a new one, a living tree. This piece is my memorial to the original poem tree. I wrote a chap book of poems: The Poem Tree.  The words to the first poem in the chap book are what you see hanging on the branches. Those large leaves are American Chestnut, from Morris Park–trees that will die soon, long before reaching their climax growth–as all American Chestnuts do since the blight. So in a way–this is also a poem about the loss of The American Chestnut, a tree that was once the Queen of the Eastern Woodlands.

The Dead Tree (a poem)

DEAD
it is
a dead tree
that
has died &
is

I think the tree feels better
even though it’s dead

I know I would

View portfolio here ART BY WILLARD
For photos on this blog:CLICK HERE, and scroll down.

Packing for the move. Came across poetry workbooks. This is a page, an abandoned effort from the summer of 2010– a year when I wrote more than 300 poems.