via The Extinction of the Future — Larval Subjects .

I must have half a dozen posts on this. I was wondering if anyone else felt this way. Here are links to three of them.

Posterity: Art and the Artist in a post-capitalist world

The Malevolent Desire for Recognition

Eight hours to get everything up. I was running out of wall space. Have to go back in the morning to finish putting the labels up, matching them to the art. I lost count, but close to 80 pieces of art in this one room. Not counting the street sketches. Here’s photos of this effort in progress. 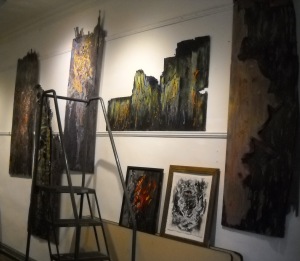 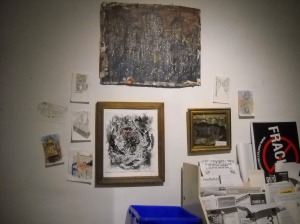 Preparing for the A-Space show–giving a lot of thought to how I want to organize it. My work tends to migrate toward these broad, thematic areas–I hope to make this clear in my arrangements. I want to help people see what I’m doing, without overcoded interpretations.

CHROMATICS & INVERSIONS:
Color exercises: watercolor or acrylic in inverted pairs– tone and colors (dark to light, light to dark): hue to complimentary hue (opposites on color wheel). Playing with color, like musical variations on a canon.
CITYSCAPES:
A new series in progress: from Plein Air street sketches to finished work, acrylics, assemblages & other media. Only 3, maybe 4 finished so far, but will tape the sketches to the wall around them to show the relationships.
BROKEN PAVEMENT
Series in several mediums, drawing on patterns and textures of pavement and streets.
RHIZOMATICS! Cells, Maps, Words
The first art I got paid for was in a class on comparative embryology; Professor paid me for crow quill pen and inks–microscopic slides of chick embryos. This is a Series in several mediums, inspired by photos in an histology text book. Free renditions, patterns and lines of communication— in no way meant to be biologically accurate illustrations! There’s a visual affinity for me between these and MAPS, and WORDS.

I don’t work from an abstract concept of the theme… more something that develops from a primarily visual interest.
There may be crossovers for any of these.

My father was a good man, as the world of his day would see him. He wasn’t an abuser. He learned to let me go my own way, and when he couldn’t be supportive, like when I was a draft refuser (he was Navy, WWII), he kept his silence. I think he was proud of me when became active in the civil rights struggle–but we never spoke of it. Silence–was his means for communicating both approval and anger. Which made him terrifying when I was a child.
I think, from the time I was 4 years old, I was resolved that whatever I would do or be in my life, I did not want to be like my father.
In his last years–with a failing heart and facing the approaching death of my mother–who had been for him the emotional outlet he couldn’t permit himself–I no longer feared him… but neither did I have any way to comfort him, to let him know that I saw and felt what he was going through.
He died alone, a year and a day after the burial of my mother. This photo is from a few years before her death, visiting my sister in Oregon.
I remember him with neither love nor anger… but with an infinite sadness. As though the one most lasting part of himself he gave to me… was whatever it was that was missing.
A hole at the center that can never be filled. I think he doubted if anyone in the world really loved him, but my mother–and he was never quite sure he deserved that.
When I think about my father, I’m never sure that I’m talking about him… or myself. 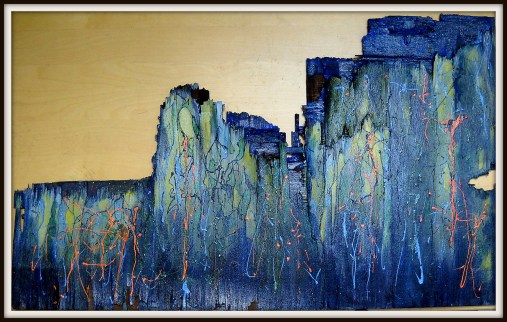 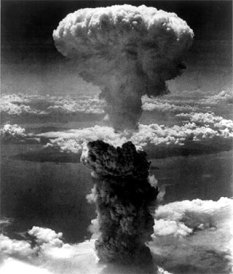 When we think of the war machine, the focus tends to be on the horrors of war itself, on the cost to social programs when so much of the national budget goes to military and arms makers, of our treatment of veterans… but these are only parts of the machine, and not the machine itself

When you see the figures for contributions to candidates and political representatives, the larger structure begins to emerge. Isn’t this the very heart of 21st C. neoliberal/fascism–that the war machine has become the real owner of the State, that the oligarchs we want to see as our owners and rulers, have themselves lost power over the War Machine–that to maintain their wealth and the illusion of influence, they are free only to act as operatives of and for the War Machine?

… a machine that has no goal but increasing destruction–of everything subordinate to it, until there is nothing left to destroy but itself… and all human life with it?

In the long run, all the Presidential candidates, are servants of the War Machine. There is no hope for survival, or significant change, within the orders of established power. We need to find the fissures in the walls, the cracks in the foundation, to build in spaces still invisible to The Machine–alternative lives, organizations and relationships in what, from within the orders of power, are but figments of the Unreal. Microspaces of imagination, resistance and love.

I  went to the Garden of Love
And saw what I never had seen:
A Chapel was built in the midst,
Where I used to play on the green.

And the gates of his Chapel were shut
And Thou Shalt Not writ over the door;
So I turn’d to the Garden of Love,
That so many sweet flowers bore.

And I saw it was filled with graves,
And tomb-stones were flowers should be:
And Priests in black gowns, were walking their rounds,
And binding with briars, my joys and desires.

The trajectory of sociopathic society is toward destruction. It promotes destruction of other nations, of its own citizens, of the natural environment, and, ultimately, societal self-destruction.

Robert W. McChesney in the preface to Noam Chomsky’s Profit Over People: Neoliberalism and Global Order admits that neoliberalism is the defining political economic paradigm of our time— it refers to the policies and processes whereby a relative handful of private interests are permitted to control as much as possible of social life in order to maximize their personal profit. Associated initially with Reagan and Thatcher, for the past two decades neoliberalism has been the dominant global political economic trend adopted by political parties of the center and much of the traditional left as well as the right. These parties and the policies they enact represent the immediate interests of extremely wealthy investors…