Enter Deaf Space… Voice Off… from the Hearing world it’s negative space. Defined by what is not there. But cross over to the other pole and there is a reversal. There is no longer negative space. Suddenly …

SIGN …   can be a ‘second language:’ an English speaker learning French… or any spoken language not one’s mother tongue. But enter Deaf Space… and it is something else.  A different reality. A difference greater, and different than, that between aural languages–as important and precious as they are in their kind.

I saw… and felt this happening for the first time at an ASL meet-up. I didn’t understand. Beneath the excitement of learning, and sharing something new… there was a touch of … fear. Of what? And that wasn’t the only time–this odd sense of something… uncanny.

My first glimmer of understanding came a few weeks ago, at an opening reception at an art gallery. It was loud; carrying on a conversation was going to be impossible. That… and out of some deeper impulse, I went Voice Off. The experience was transformative.

I’m not ‘deaf.’ My hearing, under certain conditions, no longer supports full participation in the Hearing world.  I began to learn ASL. Three years ago:  three classes, practice meet-up, hours a day working at it, and I’m still struggling. My expressive skills way exceed my receptive abilities, but again and again, when I’ve entered Voice Off…  Deaf Space… it’s felt like home. Like a baby born into a new reality… trying out my first words  (Maybe,  better!  — Cause they’re not Names in the Oedipal triangle!) …   I say that, not entirely in jest… because this may play a part in what has opened me to the Other Side of Mirror.

What one sees from the Hearing world is partial, and incomplete. As is what we see from any one side of our muti-sided mirrors of perception. The problem with the Hearing world…is that it imagines itself as whole. Complete. And divergence, as a defect that needs fixing. From there, it is an easy step to create programs to destroy what cannot be seen or understood from the one side. Just as we are destroying the worlds of our surviving indigenous cultures. Just as they are doing in Denmark, where 90% of the children are given cochlear implants, and Danish Sign Language is disappearing.

… an all too easy step toward genocide.

What I see in my baby glimpse–from the Deaf side of the mirror… is no ideal world, nothing that is not … simply… human… but a vital part of what makes us human, without which, we–as a species, are defective–a loss of a vital part of our Being, another loss among many, with each language lost, each culture, lost… all the many ranges of Neural Diversity, Sexual and gender diversity…  Lost, not by being absorbed into some greater whole.. but exterminated.  Murdered.

Genocide is no hyperbole.

I choose to go Voice Off in public. As witness. As protest. Because I’ve begun to learn something I feel vital and important, for myself. And I hope… for others.

Honored to have my piece, #1025 Memorial to Stonewall, in this exhibition>

48×30 Acrylic on canvas.
View more work at Saatchi Art, and on my web portfolio: ART BY WILLARD For photos on this blog, click MY ART on the right panel and scroll down. 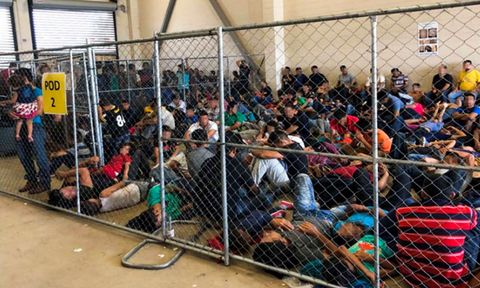 For the children in those concentration camps who are deaf, or speak only their indigenous language, and do not speak or understand Spanish, they are left with no ability to communicate with most of their fellow prisoners–and maybe, none at all–and no communication with the outside world.

Close your eyes and put yourself inside that ONE CHILD–and tell me, how anything could justify what WE are doing to just that ONE CHILD!

I deplore the use of false comparisons to scold or draw attention to this or that problem, versus another, perceived to be of lesser importance. These all presume some zero-sum equivalence, where there are insufficient resources, material, economic or social, to attack both, when, if this is so, it is only because this presumes a status quo of capitalist, political conditions, where the the application of resources to ANY given problem, will result in withholding resources from another–maintaining an equilibrium of injustice.
All these–“why are you asking to give to x, and not y?” in that larger context, are false equivalences, and if that logic applied to anything, it would be, ‘why are you asking to devote resources to x, when the only thing that’s going to matter in not so distant future, is climate change?”
The real question for any problem, is how do we apply our resources in such a way that it will address the root causes for all these problems–overcoming and replacing the entire capitalist political/ecomomic/social/military/colonialist system? How do we CHANGE the role played by each and any of the specific problems, in that system?.
Understanding the importance of the arts and its products–other than in terms of use-value, and propaganda, is particularly vulnerable. It is precisely in their HAVING no use value, that they confirm meaning our lives in our otherwise doomed and absurd world.

We are entering… have already entered, the last years of human life on this planet.

Go to around the 28 minute mark to see what we must do–but watch it all.

This is more than climate change. This is now.