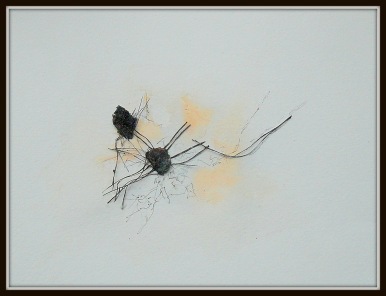 3 figures. 9″ x 11″ I’ve been thinking, that if I do a figure drawing session at Fleisher’s, I want to do something like this, superimposing several poses on a single sheet, sketch in pencil, than pen and ink, and move on to doing a series in acrylic.

Religion observes through the form of transcendence/immanence. The “ground of all being” is transcendent; this is what we do not see or experience in daily life, but, according to the religion system, we can get a glimpse through the curtain in brief experiences of grace. The transcendent is the unmarked side of the form because it cannot be explained or described. It’s an empty space. Everyday experience is the marked side, and religion devotes itself to describing the sins, transgressions, corruptions on this side. It develops elaborate classifications of sins, such as mortal/venial, the seven deadly sins, etc. In other words, religion first distinguishes this world of sin and corruption, marking it off from the perfect transcendent reality. Then it re-enters the form on the marked side to make further distinctions among sins. So sins in general are distinguished as mortal (unforgivable) and venial (forgivable) sins. Venial sins are marked, and…

While you are here – please check out my home page! INTRODUCTION My 9th class in ‘Produce Paintings’ and ‘Produce Drawings’ (these being subjects that are part of ‘Certificate III in Visual Arts’) progressed as per usual. I was mostly happy with my art work this week, and hopefully as time progresses, […]

9.5″ x 7.5″ watercolor, ink. The gray has an interesting effect on the colors, particularly with yellow.  Here, the grays dominate, from pale wash to black. The companion hues, yellow, yellow green and orange, with a pale purple wash as compliment to the yellow, an unusual combination, the mood of the grays, dark to the cheery yellows. Kind of like my mixed emotional state. Balance, without harmony. Chromatic dissonance.

Shining through the cracks 6″ x 8″ Ink and watercolor 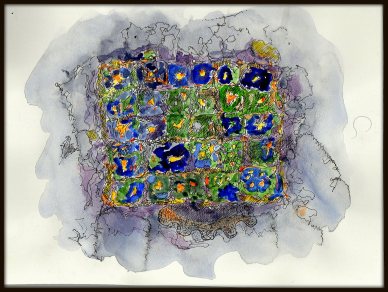 Rossbach, in discussing Luhmann’s links to early mystics and Gnosticism, has helped me realize why (despite the difficult, often dry reading) I felt an immediate affinity for Luhmannian theory. Back in the early 1980s, I was reading things like the Meister Eckhart, The Cloud of Unknowing, and St John of the Cross, as well as Zen Buddhism and other Eastern mysticisms.  As a 20-year-old, I found St. John of the Cross‘s negative theology, or via negativa, particularly fascinating.

Rossbach links Luhmann to mystics such as Jakob Boehme and Nicholas of Cusa. Here is one passage from Rossbach’s essay:

Contemplating the history of Western philosophy, Luhmann noted that 2,000 years of searching for “essence” had…