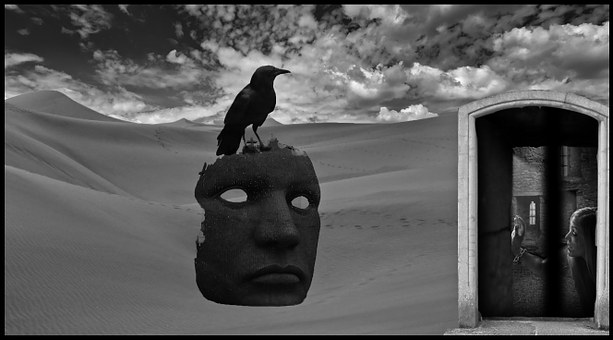 In a Facebook post, Nyle Fort, wrote of the difficulty of seeing past the neoliberal simulacra to find what is real. Maybe it helps to see this, not as binary opposites, but different *kinds* of real. In the way a fictional character is real, *as* a fictional character– which nonetheless has real generative effects.
The spectacle, too, is real, but a reality whose generative effects impair both thought and perception in such a way that we cannot see past the simulacra, or imagine, while in its thrall, another kind of reality. That suggests to me, that the way to another reality–one we can inhabit in the fullness of our human being–is not like breaking through a curtain to something that lies there, already existing, on the other side, but in the very power of imagination on which the illusion depends, that our hope lies in knowing that that power is immeasurably greater than what has been drawn on by the oppressive system holding us hostage. Like in the Faerie Queene–the flames surrounding Busirane’s castle, real enough to burn Scudamore–because he believes they are the wrong kind of real, a reality over which he has no power, while Britomart walks through them unscathed. It’s our collective belief in the simulacra that makes it ‘real’ — that is, gives it power to generate effects–in that way, challenging collective beliefs is the very essence of the work of the imagination.
We do not dance as relief from fighting oppression; we dance, because out of the dance, come the flames of passion that will burn the citadels of our oppressors. We do not sing or paint or rap or create stories to escape from one illusion to another–but TO IMAGINE THE REAL WE DESIRE, THAT WE MIGHT CREATE IT AND MAKE IT SO!