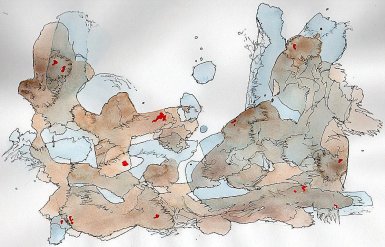 I picked up my painting from the Stonewall@50 show. Leaned against a column in the subway, waiting for the train. A man in a Septa uniform stopped… asked me about it.
“I used to do art,” he said. Train going by the other direction. Noise … couldn’t speak, waited.
“I had an art teacher in elementry school. She helped me. Made me feel I could do something. Entered me in a school contest… I was one of 3… in the whole school.”
–Do you still make art? I asked
“I took some classes at Fleischers.”
–Used to be free, I said. Not anymore.
I asked if he still made art.
” It’s all work now. No time.”
–I know. I wanted to be an artist. From time I was able to hold a crayon. Then when I was in my early 30’s, I took a 40 year detour. Took it up again when I was 70. Have made more than a thousand pieces since. Never too late.
“I saw this painting, and thought… there’s a reason it’s there for me to see. Thanks… you never know when you’re gonna find the kind of information you need. That you’ve been waiting for. ”
And my train came… and he left.

This was Soc Sec deposit day. Spent much of it, shopping. At the ACME, man in front of was pulling items from the bags they’d filled for him. Could see he didn’t have enough money. Saw a $20 bill he was holding…
I told him–how much you short?
” A dollar 20.”
I looked in my wallet. Empty! Cause I was gonna get cash back when I paid… but fished for change. Gave him what he needed. He was all.. give you phone and I can get it back to you…
I told him,  this has happened to me. And now you helped me pay back someone else’s kindness.  time will come. and someone will be there you can help in turn. That’s how it works, right? Or should? That’s the kind of world we want to live in, isn’t it?

This kinda thing happens. And I keep it to myself. I think…I don’t’ know what I think.. but it changes me, changes how I see things.
Invisible things nobody else sees. And no one else should see it.