I’ve been reading John Berger’s Understanding a Photograph. He writes in the essay, Appearances: that …

In every act of looking there is an expectation of meaning. This expectation should be distinguished from a desire for an explanation. The one who looks may explain afterward: but, prior to any explanation, there is the expectation of what appearances themselves may be about to reveal.
Revelations do not come easily. Appearances are so complex that only the search which is inherent in the act of looking can draw a reading out of the underlying coherence If, for the sake of a temporary clarification, one artificially separates appearances from vision (and we have seen that in fact this is impossible), one might say that in appearances everything that can be read is already there but undifferentiated. It is the search, with its choices which differentiates. And the seen, the revealed, is the child of both appearances and the search.
Another way of making this relation clearer would be to say that appearances in themselves are oracular. Like oracles they go beyond, they insinuate further than the discrete phenomena they present, and yet their insinuations are rarely sufficient to make any more comprehensive reading indisputable. The precise meaning of an oracular statement depends upon the quest or need of the one who listens to it. Everyone listens to an oracle alone, even when in company.

“Everyone listens to an oracle alone, even when in company” When I read that, I asked myself, “isn’t this precisely how one sees… a painting?

My calling… my vocation, as a poet and artist, began at a moment like that—an oracular vision–11 or 12 years old. Forsythia blossoms after rain, when the sun came out from clouds and turned the drops of water on the petals into prisms. Everything I’ve done since, has in some way, been connected to the effort to understand that moment.

My novel, Ari Figue’s Cat… https://www.amazon.com/Ari-Figues-Cat-Jacob-Russell/dp/1940830060 the motive for writing it; this is its central theme.

What I look for as I work—as I arrange pieces of trash, draw lines on a page, brush color on a canvas. Why I prefer abstract work. Representative art, when it seizes me, is always like this. Rousseau’s Sleeping Gypsy.

The enigma. The expectation of meaning—that defies explanation. Iconography, represented figures… are a distraction. Though a master can so charge the most meticulously rendered images with that oracular sense, that all our efforts to explain are exhausted… and we are left with what we see, and that alone. Jan Van Eyke’s Arnolfi wedding portrait. 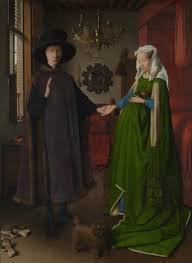 I work on a piece until I have that sense… in looking at it, in seeing it: the feeling that it means something. I have no idea what, or how to explain it. It’s enough, if I capture that feeling, an enigma. Beyond words.

We long for a vision … a way out of this fucking capitalist hell.

We don’t know what it is… but if, in seeing this, we can believe that it exists…beyond words, beyond explanation.. but there for us to find and create… I will have done my part.